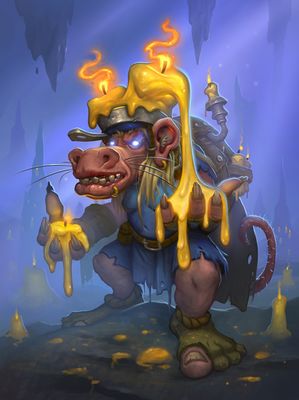 Recently, a ragtag group of adventurers were sent out to explore a mysterious portal key, shaped like a candle. I looked each of these poor souls in the eye, knowing I was sending them to their death, as I watched the candle light, a portal open, and the group disappear into the void.

Imagine my surprise when they returned, a short while later, carrying the most interesting creature on their shoulder! By all accounts he seems to be a Kobold, though interestingly not of a breed I am too familiar with. He is obsessed with candles, specifically wax, and he seems to have some skills with his waxmancy tools. He is able to turn blobs into uncanny resemblances of whatever he wants, and more than once I’ve caught him talking about his “pretty” while in his workspace.

If you see his little animated wax helpers around the Federation, don’t be alarmed. He assures me they are just here to help, and not dangerous at all. All the same, if you see any suspicious activity, report it immediately.

Big Thanks to Kearin, Tao, Bojangles, Bingbing, Aethan and DonGur for their bravery in the face of the unknown, and for teaching this old man not everything can be taken at face value.