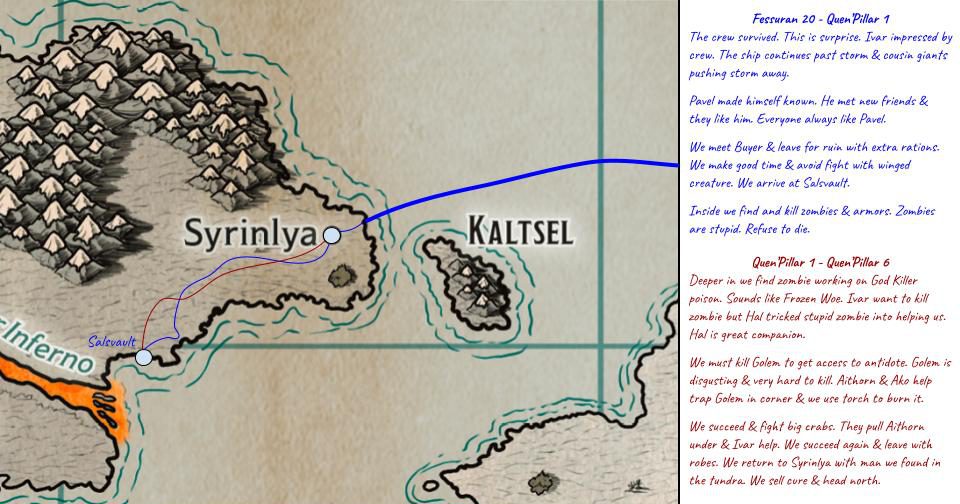 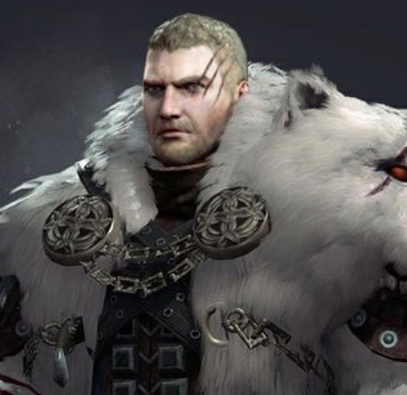 The rest of ship travel was uneventful except for one thing. We could see my storm cousins pushing back the clouds the captain was worried about. I continued to sharpen axe and feed Pavel but the time went by quickly. As we landed Pavel introduced himself to party. My friend is loved by all.

We were given Urgon’s yurt and Pavel enjoyed fire we lit. We took rations and Ivar is grateful for generosity of Ako. He is good person. Ivar is consumed with thoughts of Urgon. He was here. He sat here and slept here. Ivar feels close to friend but friend’s absence stabs into Ivar’s heart. Ivar wish to speak to no one but they need Ivar’s map. This is also a piece of Urgon that Ivar carry within him so Ivar do not mind.

We left for ruin as another group leaves for missing expedition. Another friend of Urgon’s goes to find expedition and Ivar will help after we find cure. If my new friends do not wish to come Ivar will go alone. We travel many days through Tundra. Hard travel but the air feels good. Pavel hates, so Pavel lives in furs. We avoided winged creature and lost time but we found Thin Icesheets.

It took over day to find the ruin. Hal said it says Salsvault above door. Strange place. We find zombies and living armor inside. Ivar help kill but we leave talking zombie alive. He spoke of strange things. Hal said he was from time when city flew in the skies. It is hard to believe but Hal, no matter which Hal is speaking, possesses much knowledge.

We fight zombie Golem and succeed only because of oil and fire. Ivar cut up body but forgot to cut up bodies of zombies in hallway. Those were hard to kill but real problem was the crabs. They almost killed Aithorn and pulled Ivar into water. Ivar’s new friends are strong and killed crabs and outsmarted zombies in morning. This is good group.

We found gold vials. They could have saved Urgon. It was so easy. So simple. Ivar feels rage, usually rage only comes when Ivar calls for it, but Ivar feels it boiling inside. Friends will not understand. They were not friends with Urgon. Ivar will not speak or yell at friends. They do not deserve it. Ivar hates Salsvault. It killed Urgon.

We met survivor in Tundra while returning to Syrinlya. We keep some vials in case sickness returns but give back rest. Buyer will transport and make more cure. This will help Honor, Magic, and fathers. We did good deed. Urgon would be proud. But survivor, who Ivar almost killed because of bestial rage, said friends were encased in ice. Bad things happen in same place expedition disappeared. Ivar and friends will travel north. We are strong and ready.