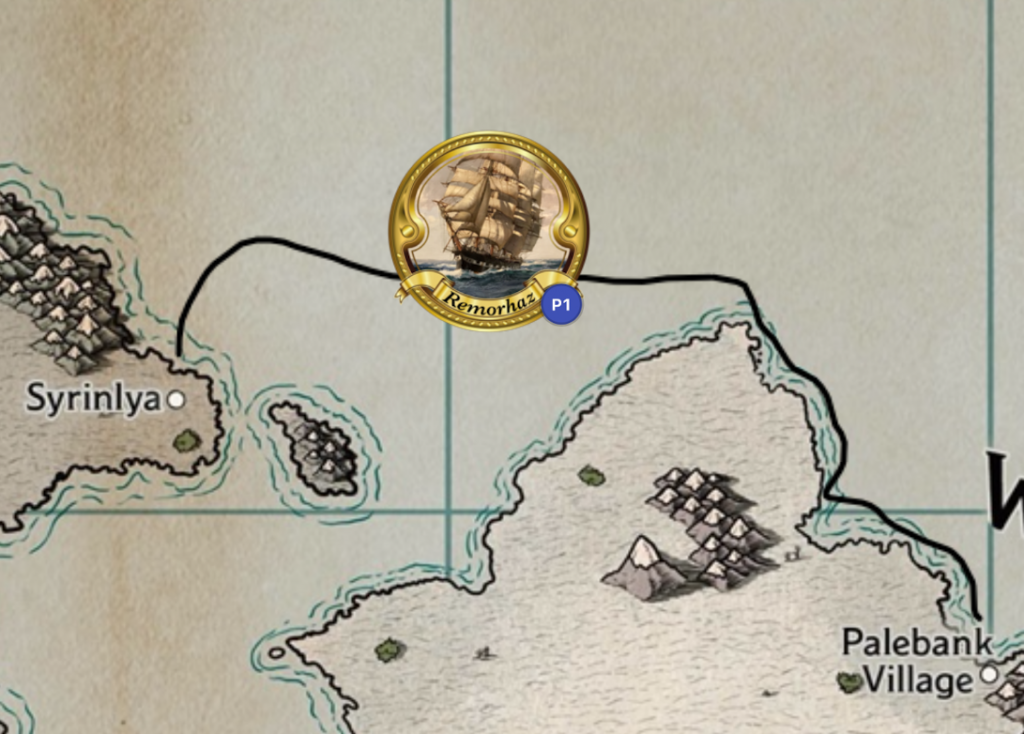 They stand in front of Elor. He offers the group 200 gold if they can trace Urgon’s steps, find the cure and bring it back to Palebank. Elor tells the party to replenish their supplies, prepare winter clothing as Eislecross can be especially cold and meet him at the dock by noon the next day. The party turns in the for the rest of the night and Aithorn begins to create a small wooden statuette of a remorhaz which by the end of the night ends up looking more like a mermaid.

Next morning, the party decides to go shopping to ready themselves for the upcoming trip. They meet a halfing tailor named Elsie who keeps a pile of seemingly unorganized wear on her coffee table. Besides warm weather clothes, they purchase some snow shoes, crampons, climbing kits and various other assortment of tools. They also secure some weapons for the trip from another vendor. Aithorn continues to work on his statuette that looks more like dragon turtle, before they go to the docks he gifts it to Honor and Magic. Afterwards near noon, they meet Elor at the docks.

Elor gives the party their next lead. He says find Orvo Mustave at the Syrinlya expedition camp, he’s gone along with Urgon to a few expeditions and may have a clue to the location of where the vials were found. Elor instructs the party that once they have the antidote that they find “The Buyer” at the expedition camp, “The Buyer” can then deliver the cure with much haste. As a token of appreciation Elor gives the party a bag of healing potions as he departs and introduces them to Bosek Frostbeard, the captain of the Remorhaz.

Captain Frostbeard explains the ride will take six days. The first three along the coast and then the last three in open water to Eiselcross. The party gets introduced to the rest of the crew which includes Kalda, the elderly halfling cook and her grandson Jimmy who Aithorn tries to play hide and seek with but Jimmy shows no interest. There is Reinga Yelfaren, the elven first mate and human Mirio Soldado, the quartermaster. The crew is also accompanied by a few deck hands.

The full moon rises and the first night goes uneventful for the most part. However, some of the party and the crew are kept awake due to a howling somewhere on the ship. It eventually ceases and everyone gets their full nights rest.

Curious, Halindoor and Aithorn decide to search the lower decks of the ship to see if they can find anything on interest due to the disturbance the night before, they unfortunately find nothing. They tell the captain who confirms that he heard it as well and assures them that he’ll send the crew to investigate if there are any stowaways on the ship. Akoako has a conversation with Mirio and they reminisce about their time in the military. That night Aithorn spots a large sperm whale traveling alongside the ship. He wakes the party to witness as at the same time a meteor shower can be seen in the skies above as Halindor tells them it’s a good omen. The next two days go without issue.

In the mess hall the party eats breakfast as they hear cries of help on the main deck, SAHUAGIN ATTACK! The party successfully defends the ship from its would be intruders and none of the crew are lost. The party stand victorious as the new day continues and everyone goes about their business as usual.

PrevPreviousNew tokens and my setup
NextIvar’s Journal Entry 1Next